In Italy in the 1400s, art was a business like any other. People commissioned paintings from workshops, which were headed by master painters like Andrea Mantegna [mahn-TEN-ya] (1430–1506). Though it can be difficult to attribute paintings made in the workshop system to one artist, these paintings are attributed to Girolamo da Cremona.

We haven’t determined with certainty the original use of these panels, but one suggestion is that they adorned a piece of wedding furniture. The bride’s father or another male relative would have commissioned the paintings to decorate a cassone [kass-SO-nay], an elaborate chest for seating and storage of clothing, cloth, and jewelry. Cassoni (plural) often stood in bedrooms, where guests would be received, and fancy cassoni were intended to impress visitors with the family’s wealth. Paintings that were based on literary subjects, like these panels, were entertaining and also spoke well of the family’s education. Along with the message the paintings sent to visitors, they also reminded those who acquired such works how to live a Christian life. Other possibilities are that the panels decorated the sides of a bed platform, or that they might have adorned the walls of a Humanist’s studiolo (a scholar’s study or library).

Since wealthy patrons in the 1400s wanted paintings that would show off their aristocratic tastes, they liked to hire artists who were familiar with subjects inspired by ancient Greek and Roman literature and classical art of the past. The artist who painted these panels based them on a group of poems called “The Triumphs.” Though written by Italian poet Francesco Petrarch [fran-CHESS-co pet-TRARK] a century and a half earlier, his poems were still widely popular when these paintings were made. The poems allude to triumphal processions that passed through the Roman forum on their way to the Capitoline Hill, where the most sacred Roman temples were located. The processions consisted of marching men and prominent figures atop chariots pulled by four horses. The subject may have a dual significance in this case, as weddings of two powerful Renaissance families were also proclaimed “triumphs.”

These paintings can be read like comic strips, from left to right. They are not taken necessarily for face value, but rather for the allegorical meanings associated with their imagery. In the left-hand panel of the first painting, for example, Love rules over everyone—until in the second panel Chastity takes him prisoner. Chastity takes away Love’s bow and arrows and puts him in chains (see Cupid chained to the front of Chastity’s chariot in the middle panel). In the third panel, Death crushes everyone else under his wheels. But in the first panel of the second painting, Fame wins out over Death. Time, in the next panel, destroys Fame. And finally, Divinity triumphs over all. God sits on top of the last chariot. The underlying moral of the paintings is that, in the end, the only true hope for salvation is faith in God.

Love’s chariot is surrounded by the captives of love, among them the Roman gods Jupiter, god of light and sky, and Mercury, god of trade, profit, merchants, and travelers. Behind the chariot are classic poets of love, Virgil and Dante among them. Love, hence, conquers all.

Chastity wears a white dress and carries a palm for victory. Unicorns pulling the chariot symbolize innocence. Cupid is now defeated and bound. Below Cupid are the virtues of Honesty, Shame, Reason, Modesty, Perseverance, and Glory.

Death crushes all beneath his wheels. The landscape is barren. Someone’s crown has rolled into the foreground showing that even the powerful are not spared.

Fame holds the book of history. Around the chariot are heroes of Roman history. Also present is Judith, a biblical hero, holding the head of Holofernes [hall-oh-FAIR-knees], whom she killed to save Israel. Behind the chariot is a group of ancient philosophers led by Plato, Aristotle, and Pythagoras.

Father Time, who walks with the aid of a stick, is holding a “tau-cross” or “T” cross, alluding to the first letter of Theta, the word for God. He’s surrounded by old men in an arid landscape with the light of a setting sun.

God is surrounded by symbols of the four evangelists (Matthew = man/ angel, Mark = lion, Luke = ox, John = eagle). Red seraphim (the highest order of angels and fiery caretakers of God’s throne) flutter all around him, probably signaling divine inspiration. Around him are the apostles.

Comparisons Across the Panels

In each panel, compare the different beasts pulling the chariots, what each figure atop the chariot is holding, shapes and patterns on the chariots, trees and background scenery, and scene-framing rocks. Also note that God is the only seated figure.

To reinforce that these paintings mark the coming together of two powerful families, the artist included each family’s coat of arms. One probably belongs to the Gonzaga family, who at the time ruled the Duchy of Mantua where Mantegna’s workshop was based. Each coat of arms appears on a tower in the background—one in The Triumph of Chastity and one in The Triumph of Fame.

The landscape in the Chastity panel is very lush, green, and fertile looking, as opposed to the rocky barrenness in the neighboring Death panel. The variety of landscapes and the narrative detail within them helps set the tone in each scene. Deep landscape vistas also presented the opportunity for artists to demonstrate recent developments in conveying depth through perspective. 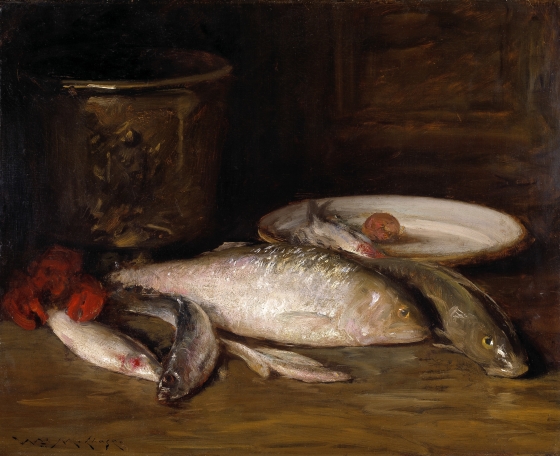 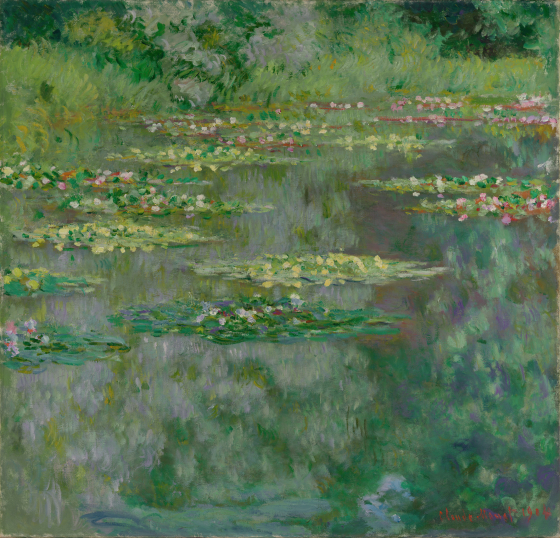