Students will list colors, shapes, and images they see in the Malagan figures. The teacher will then put the items on the list into a song (using a familiar tune) to help students remember all that they saw.

These figures come from New Ireland, a large island that is part of the country of Papua New Guinea. Malagan figures are usually carved by sculptors who live and work in the community. Sculptors use different forms and designs that are specific to each clan. Rights to the designs are owned by individual clan members, multiple different clan members, or the clan as a whole. Designs can only be reproduced by an owner of the rights, with the assistance of a sculptor. Great care is taken to avoid infringing upon the designs owned by another man or lineage. Because Malagan figures are traditionally discarded or burned after use, it is important for the owner to remember exactly what his clan’s Malagan looked like so that he will be able to reproduce the design.

Malagan figures are described as “skins” that contain the life force of a deceased person during a funerary ritual. The name “Malagan” is given to both the carvings and the funeral ceremonies. While the sculpture is not intended to be a picture of the deceased, it is thought of as an image of the life force that produced and animated the once living person. Funerals are considered joyous occasions. Malagan carvings take center stage in funeral rites and allow the soul of the deceased to take part in the spiritual realm of immortality. Although Malagan figures are traditionally discarded after use, ethnographers claim 5,000 to 7,000 Malagan carvings are kept in collections worldwide. Fascinated and intrigued by these sculptures, anthropologists and early colonial collectors began collecting them soon after being discarded. Sometimes, Malagan figures are sold after they have been used for their funerary purposes.

Malagan figures appear to have two forms—the outside and the inside. Open fretwork surrounds a solid, ornately carved and painted central core. The net-like exterior is interpreted as a “trap” for the life force. The figures have been described as “bodies wrapped in images.”

Painting is the final step in the process of making Malagan figures. The carving is washed in white paint, which is made from ashes and mixed with water from a young coconut. Black, red, and yellow paint is used to create the designs. The act of painting is thought to give the figure life.

The large figure is a representation of a fish called the rock cod—a wam or bigmaus. The rock cod is known to live under rocks and has the unusual characteristic of becoming female with age. It serves as a symbol of fertility for the clan—with its change in sex it becomes capable of reproducing. The rock cod also connects to the matrilineal structure of the culture.

The two smaller figures are defined as warrior figures. Each appears to be topped with a cocomo, or hornbill. The warrior attached to the nose of the fish is called the “stopper warrior,” or Kor. In this instance, the kor is interpreted as containing the life force that has entered the rock cod effigy.

The figures’ eyes are made from the iris-like suction pods of shells, which are collected by women on the dry reef. The term for the Malagan eye is “banana shoot.” 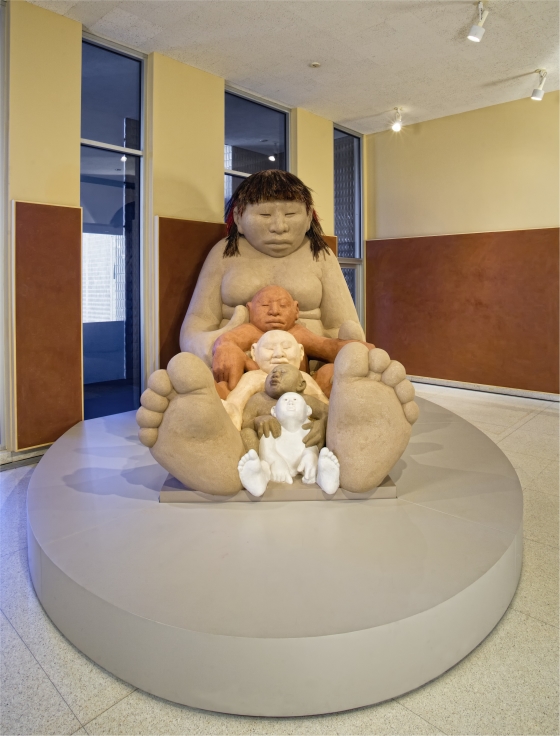 This lesson focuses on Roxanne Swentzell’s sculpture Mud Woman Rolls On to evoke thoughts about families and their stories. Students create their own picture story about family. 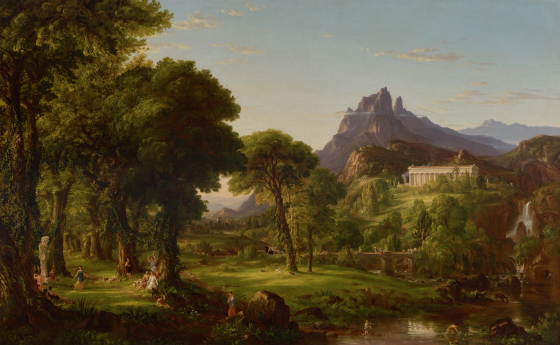 Students will look closely at Cole’s painting Dream of Arcadia and talk about what they see. They will then use their imaginations to play a game of Hide-and-Seek in the painting. 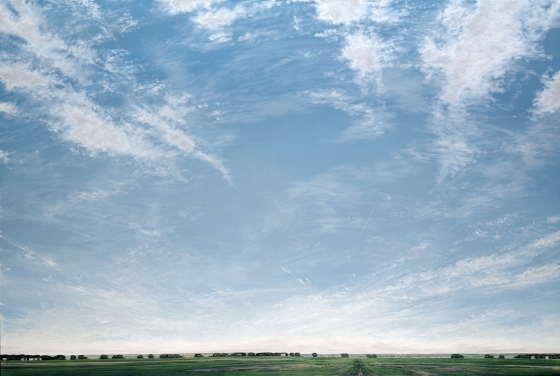 In this lesson children will have an opportunity to linger outside and watch the clouds go by. They will then use shaving and/or whipped cream to shape and sculpt the clouds that floated by, paints to explore the color of the sky, and movement to feel like a cloud. Children will compare these experiences to the clouds and sky in By June the Light Begins to Breathe.

Students will learn what a sculpture is by looking at images of Mark di Suvero’s sculpture Lao Tzu. They will compare its size to other objects in and around the classroom and experiment with various building materials and found objects in an effort to get a sense of how sculptures are created. 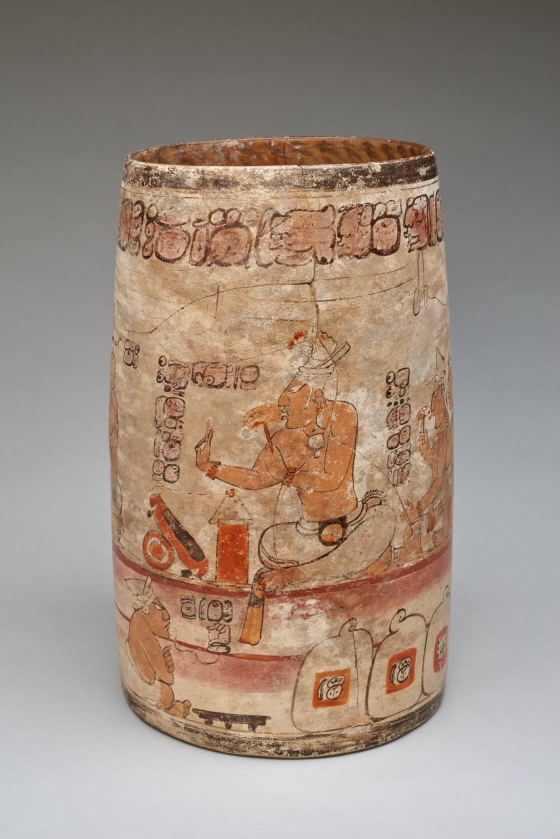 More Than a Cup

Students will explore the artistic characteristics and function of the Maya Vessel with Palace Scene, then create their own personal drinking vessel using Styrofoam cups and an assortment of artistic materials!

A Symbol of Protection

Students will compare and contrast the role of body art among people of different cultures and time periods, then create a tattoo design that symbolizes protection.