Students will learn what a sculpture is by looking at images of Mark di Suvero’s sculpture Lao Tzu. They will compare its size to other objects in and around the classroom and experiment with various building materials and found objects in an effort to get a sense of how sculptures are created.

Funds from NBT Foundation, Jan and Frederick Mayer by exchange, and friends of modern & contemporary art, 1996.11

Mark di Suvero was born in China in 1933 to Italian parents who were serving as diplomats in Shanghai. He vividly recalls visiting the Forbidden City, the Imperial Palace complex located in the heart of Beijing, and marveling at the experience of space as at once infinite and comprehensible. When he was seven years old, di Suvero’s family moved to San Francisco where he dropped out of high school to explore the United States. After studying art at the University of California at Berkeley, di Suvero moved to New York in 1956 and did construction work to support himself while working on his art. Di Suvero started off creating sculptures out of wooden beams, metal pipes, old tires, and other discarded items. His materials would soon grow to I-beams, like those used in Lao Tzu, which are made of steel and typically used for support in houses.

In 1960, di Suvero was forced to quit his construction job after an on-site accident crushed his pelvis. This didn’t stop him from creating art, however. After using a wheelchair for the next decade, he began walking again with braces and crutches. Despite his limited mobility and the industrial qualities of his sculptures, di Suvero performs most of the work himself. “I do most of the cutting, welding, and crane work,” he says. The artist uses his crutch, several cranes, a cherry picker, and welding equipment that he operates himself to bring the sketches of his artworks to life.

Di Suvero moves directly from drawings of his ideas to the actual realization of his sculptures, with no three-dimensional models in between. “If it works in space on paper, it’ll work with I-beams,” he says. In fact, some have likened his sculptures, with their strong diagonal lines and looping forms, to drawings or “doodles” brought to life in space. Even though this sculpture is nearly 30 feet high, 36 feet long, and weighs 16.5 tons, di Suvero insists he does not make “monumental sculpture.” Instead, he aims to create sculptures that will activate the spaces, the structures, and the people around them. Di Suvero attempts to engage viewers with his sculptures, saying, “I believe that certain structures have a certain resonance for people.” Sonnet Hanson, DAM Master Teacher for Modern and Contemporary Art, describes Lao Tzu as “a jungle gym for the imagination—both for di Suvero, who animates space through strong but playful lines, and for viewers, who can make their own associations with the shapes, colors, line, weight of the sculpture and the space that it animates.”

Di Suvero names his sculptures after things he cares deeply about, drawing from his studies and interests in philosophy, poetry, music, dance, science, and art history. Some of his titles acknowledge people who inspire him, like Mother Theresa and jazz musician Charlie Parker. He named this sculpture after Lao Tzu, a Chinese philosopher from the 6th century BC whose writings are the foundation of Taoism (a centuries-old tradition that bases human experience on nature, vitality, and peace). But di Suvero is cautious about assigning specific meaning to his sculptures. “I try to keep them abstract,” he says. “The titles are just a handle.”

This sculpture includes circular shapes, strong lines, and sharp angles. Look for the interlocking arcs di Suvero uses to link the I-beams together.

At the top of the structure, there is a mobile steel beam in the shape of an L that moves with the wind.

According to di Suvero, the color was chosen to contrast the blue skies of Colorado.

This sculpture is located in the plaza between the Denver Public Library and the North Building of the Denver Art Museum. Seeing the sculpture from different points of view—up close, far away, and at different angles—might make it seem like a completely different object. Notice the relationship between the sculpture and the buildings, people, and space around it. Also notice how the shadows cast by the sculpture play a roll in how it is seen.

From Trash to Treasure

Students will discover that objects can be used in several different ways and will brainstorm new uses for objects that might otherwise have been discarded. Students will work together collaboratively as an “art director” to create a work of art using found materials.

After exploring different images and characters in the parades depicted in The Triumphs, children will make masks and have a parade of their own! 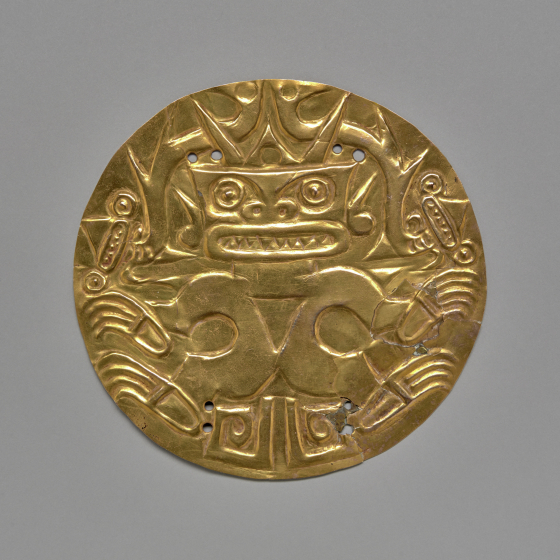 What Shapes Can You See?

Students will investigate the use of shapes in Breastplate and combine basic shapes to make an interesting picture of their own.

At Home: Spark a Conversation

Animals, Colors, and Senses, Oh My!