Learn about the history of the British East India Company and its role in trade and colonization. Students will also think about livable wages and apply this understanding to modern companies and realities.

Art, much like mathematics, shapes our world in all kinds of ways. Both represent the various stories of humankind. The teacup and saucer in this lesson, which is closely connected to both China’s ceramic history as well as global economic shifts in the 1700s, exemplify this. The tea industry and Britain’s colonial power dramatically changed the economies of several countries and altered global power dynamics in ways we are still experiencing today. The driving force of this shift, however, depended on the same source that continues to move economies: the cost of labor. Students will be introduced to the ways unethical and exploitative labor practices drive huge markets by examining tea workers in British-controlled India and comparing the current cost of living to the wages of modern-day employees of mass corporations.

Both art and mathematics document our experiences as much as they are influenced by our realities. Students will familiarize themselves with this concept as they are introduced to contemporary artists whose work is informed by data and numbers. Understanding the role that math can play in art and artmaking supports interdisciplinary thinking, which is vital for creativity and critical thinking skills.

Hiding inside the teacups found in the Griffin Shipwreck lay a vast history of international trade and exploitation. These cups represent two products that shaped global power dynamics in the 18th century: tea and porcelain. We still see the effects of the tea trade today, particularly in the wealth it accumulated for Britain at the expense of China’s and India’s economies. Britain was able to grow its power on the global stage primarily through The British East India Company, which facilitated the exploitation and colonization that funded Britain’s rise to power.

Power and privilege are complex topics that shape all aspects of society, on personal, national, and international levels. Understanding some of the events which impacted how power and privilege are distributed in society is important. Art can be a key tool in this process, both as a reflection of power dynamics and as a commentary on power itself. For example, these teacups represent the aesthetic tastes of the English market in the 1700s as well as the politics of the tea trade that surrounded the movement of these items. Art and trade are just some components of an infinitely complex system of power and privilege that is determined by different societies and within specific cultural and historical contexts.

This lesson explores how the British East India Company redistributed wealth across Britain, China, and India during its height of colonization. To do so, students will start by learning some information about the tea and porcelain trade as well as the economic effects of colonization. It is important to consider the living conditions of the people behind this artwork, or rather, behind the tea-growing industry that supported this art. Students will think about livable wages and apply this understanding to modern companies and realities. By learning more about the tea trade and calculating modern costs of living, students will gain a deeper understanding of the history, economics, power, and privilege that impact the creation and flow of artworks, like these unsuspecting porcelain teacups.

Start by watching this video on the history of tea and think about the following questions:

Connecting the Teacups and Colonization

While these teacups are from China and were made for a European market, another Asian country played a big role in the tea trade of the 18th and 19th centuries: India. As you learned from the video, once Britain stole the secrets of tea cultivation from China, they began growing tea in British-controlled India. This process was carried out by The British East India Company, which colonized India through deceptive and unethical trade tactics. Colonization occurs when one nation takes over another, conquering its population and exploiting it, often while forcing its own language and cultural values upon the conquered people. Colonization is typically marked by slavery, intense extraction of raw materials, repressive rule, and the creation of hierarchies based on external characteristics. While The British East India Company was not officially associated with the British government, it was a massive colonial force in India and around the world. Many stockholders in the company were high profile members of British society who wanted to protect British economic interests, even if it meant deliberately exploiting trade with Asian nations.

The tea grown in India under the British East India Company was enjoyed by the British market for far cheaper than Chinese tea. The British were able to keep prices low by underpaying Indian laborers. Not only were Indian tea workers paid poorly, they also faced extremely high taxes under the British East India company. The food they grew was largely exported to Britain and sold to other countries – though the profits went to Britain, not India. When harvests were poor, Indian laborers starved. Between 15 and 29 million Indians died of British-induced famines, which took place due to unfair wages, high taxes, and Indian-produced goods being exported out of the country in order to turn Britain a profit.

Colonization drained India of its rich resources and has had lasting impacts even into present day. In the early 18th century, India’s share of the world economy (in terms of GDP) was around 25%; by the time the British left, it was around 4%. For comparison, China’s economy was 22.3% of the global economy at the time. As of 2015, the US’s share of the global economy was 17.5%.

Recently, renowned Indian economist Utsa Patnaik calculated how much Britain owes India from colonization. She found that between 1765 and 1938, Britain drained India of just under $45 trillion in today’s money.

To learn more about how the British managed to take so much wealth out of India, read this article.

Dig Deeper Into Colonialism and Art

Some artists challenge colonial histories that hide injustices through their work. Suchitra Mattai is one such artist; she has also collaborated with the DAM in the past!

Your Turn: Expenses and Living Wages

What is a budget?

A budget is a way to keep track of exactly how much money is coming into your possession and exactly how much money is going out. If you get any kind of income, from getting an allowance to earning a paycheck, you want to know how much money you have at any given time. The most common way to make a budget is to record every source of income and every single expense. The table you fill out in this activity is just looking at expenses, so you can calculate the income needed to afford these costs.

The Intersection of Math and Art

You have seen how art, like a teacup, can represent powerful forces of politics, trade, and history. Art can also represent mathematical elements or ideas; data can also factor into the creation of an artwork. Some artists may feel inspired by mathematical concepts, using numbers or shapes to symbolize feelings, spirituality, or even experiences. Other artists may use data as a starting point, creating a more abstract rendering of the information they find so interesting.

Your Turn: How Can You Incorporate Data Into an Artwork?

Two examples of artists who incorporate math as an integral part of their artmaking are Tatsuo Miyajima and Anna McKee. McKee’s work is not currently at the DAM, however, Miyajima created one of the permanent installations on view at the museum between the first and second floors.

Tatsuo Miyajima is a Japanese artist who uses numbers to merge Buddhist philosophy and his three key concepts (keep changing, connect with everything, and continue forever). Miyajima uses technology to create immersive art that “performs” for the audience. He believes that observers play a key role in bringing art into completion. He explains that numbers are very neutral – but they are given meaning in his work through the imagination of audience members who see it. This makes numbers and data the perfect medium for Miyajima to use in his artwork, which reflects and expresses both the impassivity of the universe as well as its potential. The artist’s Buddhist ideals also remind him that such potential is in each of us.

Miyajima created the piece, ENGI, that you see on the slanted walls leading up to the DAM’s second floor. The artist held a workshop with local residents and gave them each a mirror used in the piece. Each mirror displays a set of LED numbers and either counts up from 1-9 or down from 9-1. Community members programmed the rate, or how fast, the mirrors display the numbers as they count. Using numbers in this way shows the individual but interconnected paces of visitors’ lives in the DAM community, and the invisible connections shared.

Anna McKee is an artist who explores the intersections of time, land, and human interaction. Her work focuses on memory, transformation, and the environment. McKee uses data on ice cores, glaciers, ice sheets, and other climate change science to create pieces that contemplate the environment in surprising, ethereal ways. Her piece, Reliquary is a sculptural installation that uses extra water samples from over three kilometers of glacier ice, collected in glass tubes. The artwork expresses 68,000 years of temperature history from the ice sheet. McKee was inspired by her time on the West Antarctic Ice Sheet in 2012, when she accompanied Eric Steig, Professor of Glaciology at the University of Washington to his research lab there. Steig and several graduate students also shared data and insights that contributed to the design of the art piece.

McKee explains on her website that this process of creating data-guided art about the icy worlds that are rapidly disappearing due to climate change is a means of “mourning and acceptance”.

Students will examine the artistic qualities of the paintings, identify different entities or elements which triumph in contemporary life, and develop and illustrate a written piece about an element or entity that triumphs in their lives. 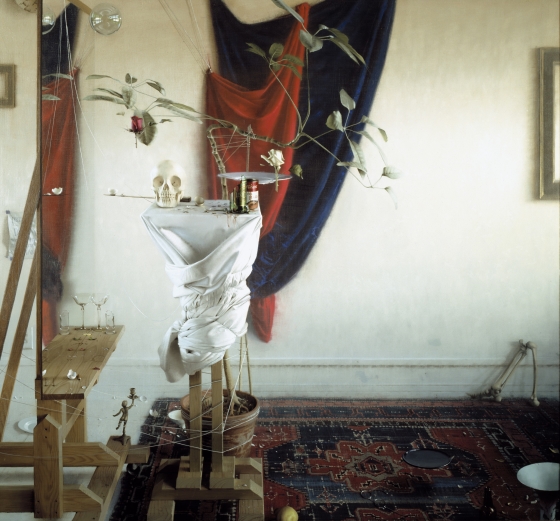 Students will observe and discuss Daniel Sprick’s still-life painting Release Your Plans and comprise a list of questions they would like to ask the artist. They will then attend a mock press event as art critics, asking questions and jotting down notes for an art review they will write as homework.

Students will examine the visual tools used in the painting Road to Santa Fe and how those tools help the painter tell a particular story. They will then use the painting to explore storytelling and use brainstorming strategies to enrich the content and voice of stories they will write. Multiple drafts and peer-editing will help teach students how working and reworking a piece, much like painters do when planning a painting, will strengthen their finished product.