James Squires was the paintings conservator at the Denver Art Museum.

In my last post, I discussed some of the techniques I used to examine the Canaletto. In this post I will review (with pictures!) my findings. The techniques discussed were: normal, raking and specular illumination, ultraviolet-A radiation, and x-radiation. I was able to gather useful information from all of the techniques for my assessment.

Viewing the picture under bright, even light really made visible the discoloration of the varnish and the differences in color and surface between the original paint and the previous restorer’s work. Viewing the entire artwork, above, the surface is generally darkened and discolored overall. Old restorations are visible along the edges of the sky. See slide 1 below. Closer examination of the center of the picture reveals a tonal and textural shift in the surface suggesting a restored passage. See slide 2 below. Note how the dark horizontal lines abruptly end at the column and above the bell tower. The dark lines are slightly thicker deposits of a natural resin varnish that has discolored (turned yellow/gold) over time. The varnish filled the low points of the artist’s brush stroke, indicating he pulled his brush (and thus paint) horizontally across the surface. The central passage, though similar in color, does not exhibit the same texture, thereby indicating a restoration. Examination of the same passage using the stereomicroscope further accentuates the textural differences between the original paint film and the restoration. See slide 3 below.

Raking light, where a single light source is placed in the same plane as the picture, revealed minor distortions in the canvas caused by stretching. These "draws" are common and easily treated. More significantly, examination using specular light, particularly oblique specular illumination, revealed an interesting surface topography. See slide 4 below. The texture seen in this detail does not correspond to the artist’s brushstroke nor cracking in the paint layer. The texture is a result of the degradation of the lining adhesive used to adhere the original canvas to an auxiliary one. As the adhesive degrades it breaks up into small "pools," creating the texture seen here. This texture can be removed, but the two canvases will need to be mechanically separated.

Examination using ultraviolet-A radiation (UV-A) helped to identify and accentuate different materials. Ultraviolet radiation is of higher energy than visible light. Many artists' materials uniquely "auto-fluoresce" when exposed to UV-A. In the case of our Canaletto, the overall greenish tone indicates the presence of a natural resin varnish. See slide 5 below. More significantly, note the ‘opaque’ passages throughout the picture. They are most notable along the edges of the sky. These passages (and they are numerous) reveal areas of restoration. Generally speaking, restorations will absorb ultraviolet radiation, thus appearing dark and opaque. In this case, the restorations exist underneath the natural resin varnish and therefore do not appear as dark as they would if a coating was not present. You can see the wholesale application of the restoration layer. I suspect the damage is not as bad as the overpaint suggests. It was more common practice in the late 1800s and early 1900s for restorers to completely overpaint small damages than to fill, texture and inpaint the losses as we do now. To really get a better understanding of the losses, I needed to see more deeply into the picture.

As mentioned in my last post, x-rays allow you non-destructively look beyond the surface to gain a better understanding of what lies below. This is very important in modern conservation because effective treatment strategies cannot be developed without first understanding the actual condition of the object and its previous treatment history. In the x-ray of the Canaletto, we see the wood stretcher (and keys) on which the canvases are stretched and the tacks that secure them to the stretcher. See slide 6 below. From a condition perspective, the dark areas along the edges and in the center reveal actual losses and tears in the canvas. These tears, particularly the one in the center of the picture, is most likely why the picture was lined to an auxiliary canvas support.

To summarize, through examining the picture using these techniques I’ve gained a better understanding of the condition of the original artwork, revealing where and the extent of damage. I’ve also gained a better grasp of the materials used by the restorer and their condition. From this information, I am able to develop an effective treatment strategy that both recognize the artist’s hand and the picture’s treatment history. 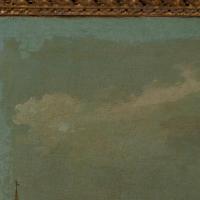 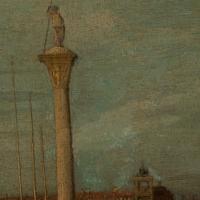 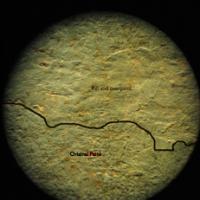 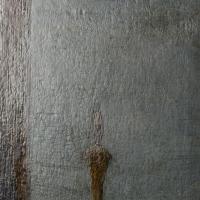 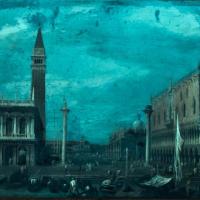 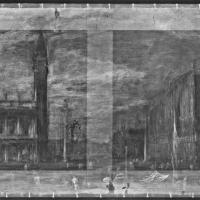