John Lukavic is the Andrew W. Mellon Curator in the department of Native arts. John has been with DAM since 2012, and when visiting the museum, he recommends that visitors don’t miss Frida Kahlo, Diego Rivera, and Mexican Modernism.

As many of us find ourselves working and studying from home during the worldwide spread of COVID-19, let us use this time to think about the impacts other pandemics and epidemics have had on world populations and their arts.

Sometimes we can directly see visual records of such times as seen in medieval depictions of leprosy in illuminated manuscripts. Likewise, pictographic accounts of smallpox epidemics that spread across the Great Plains of North America in the 18th and 19th centuries are seen in winter counts—pictorial calendars that use a single image to represent a year or a season. In fact, as noted by ethnohistorian Linea Sundstrom, "Chronological listing of references to epidemics in winter counts shows that the northern plains groups endured about 36 major epidemics between 1714 and 1919."

The 1837-38 epidemic of smallpox, for example, decimated the Mandan Nation. Middle Missouri prehistory specialist Donald Lehmer’s 1977 study suggests that the Mandans, Arikaras, and Hidatsas from the upper Missouri River region lost a combined 70% of their populations. A recent article by history scholar Clay Jenkinson on the spread of smallpox in this region states that, "In two waves of smallpox on the Upper Missouri, separated by 56 years, the Mandan had been reduced from a proud nation of more than 15,000 individuals to a pathetic remnant of 145.” With so much loss we must consider the dramatic impact such events had on the transmission of Indigenous knowledge, but also celebrate the perseverance of these communities to adapt. Today the population of the Three Affiliated Tribes (Mandan, Hidatsa, and Arikara) have again risen to around 15,000 citizens who live on the Fort Berthold Indian Reservation in North Dakota and elsewhere.

Understanding this history of pandemic and loss provides us with a lens through which we can see artworks from this same time period. When looking at arts from the first quarter of the 19th century that came from the upper Missouri River region, we see many similarities in materials, design, and construction—so much so that it is impossible to attribute the work to artists from one specific Indigenous nation from this region or another. Sundstrom notes that:

"Some of the most definitive characteristics of northern plains groups at contact may have developed in response to disease and population decline. The social fluidity whereby tribes or divisions of tribes split apart and regrouped may have developed as a means of coping with catastrophic population loss. An example of this was recorded historically when the Mandan, Hidatsa, and Arikara survivors of a series of smallpox epidemics in the first half of the nineteenth century joined at Like-A-Fishhook Village. Many plains tribes included bands whose names, language, or customs indicate separate ethnic origins. Some of these alliances may have been formed to compensate for population losses owing to epidemics."

Furthermore, she writes that "any aspects of Native life in the Great Plains were affected by epidemics. Military might depended as much on a group's health as on the training and technology available to its warriors. Patterns of social aggregation and dispersal, religious revivals, migrations, and survival of particular groups were affected by epidemic disease." Other challenges to specific attributions of arts from this region and period of time come from the scarcity of extant objects and few visual references from which to compare.

Museum Collections and the Paintings of Catlin and Bodmer

We see evidence of Lehmer’s observations in men’s shirts from this time period. While we may know they were made by artists from this region, assigning an attribution to a particular community is difficult for several reasons. In the 1965 exhibition catalogue American Indian Art Before 1850, then Denver Art Museum curator Norman Feder noted that few pre-1850 arts by Indigenous artists from any region exist in US museums. Some collections exist from Lewis and Clark’s expedition from 1804-1806, but William Clark’s personal collection, once housed in his home in St. Louis until his death in 1838, went missing around this time and the whereabouts remains unknown to this day. Feder also mentions that "a few early collections may be found in museums outside the United States. Noteworthy among these is the Paul Kane collection in the Manitoba Museum in Winnipeg" as well as the collections of Prince Maximilliam of Wied "dispersed in museums located in Berne, Berlin, and Stuttgart." However, the total number of works of American Indian arts from the Plains before 1850 remains quite small.

When you narrow down these early 19th century arts to just shirts and those exclusively from the upper Missouri River region, there are few examples from which to compare, and even fewer with documentation. Of the 40 shirts in the collection of the Denver Art Museum from the Plains and Plateau regions, only two date to around 1830 or before. One is attributed to an Assiniboine artist and the other is the focus of this article. So with limited examples, great losses in the continuity of Indigenous knowledge, and because these works predate photography by decades, the primary way to identify these shirts is through the written reports of fur traders and explorers, as well as the paintings of George Catlin and Karl Bodmer who traveled in the region in the 1830s. 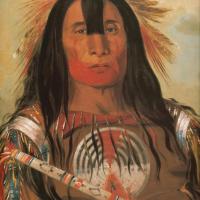 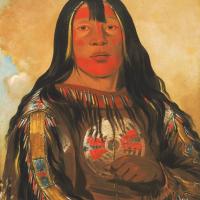 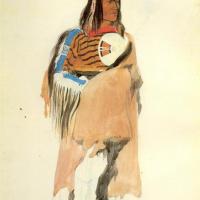 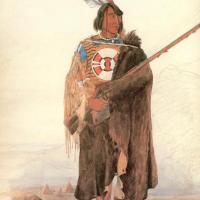 In December 2019, the Denver Art Museum received two shirts from the Upper Missouri region of the Plains as gifts from a private collector: one dated around 1800-1820 and the other to around 1855 (not pictured). The earlier of these two shirts is without question the single most significant work to come into the DAM’s Native arts collection in decades. It is exceedingly rare and among the earliest shirts from the Upper Missouri River region in existence. The shirt’s lack of beadwork, minimal use of Bayetta trade wool, and quilled design elements point to its early creation date and connection to this region.

This fringed “poncho” style shirt with red trade wool rectangular “bibs” was made using Native tanned mountain sheep hides and sewn using sinew (animal tendons or ligaments used as thread). On both the front and back of the shirt are saw-tooth edged medallions (rosettes) and over each shoulder and along each sleeve are three quilled lanes with geometric patterning. While little was recorded about the meanings of such elements, the medallions are commonly considered representations of forces of nature, such as the sun or powerful winds. Museum ethnographer Colin Taylor has also suggested that the designs on medallions such as those seen on this shirt and many others from this region may represent the wings of a Thunderbird, a sacred being for many Plains tribes. The central medallions are made from porcupine quills and likely plant material, and possibly also bird quill. Porcupine quillwork is a technique indigenous to North America and was prevalent prior to the trade of European manufactured glass trade beads. Today this technique is experiencing a resurgence among many Native artists. The materials used on his shirt (as well as materials not used, such as glass beads) suggest it was made just as trade between fur trappers and Native people began in the central part of North America. 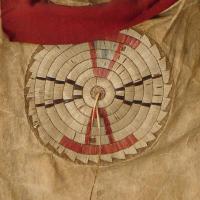 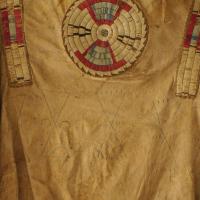 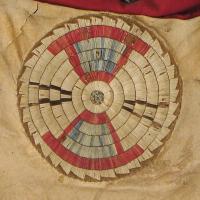 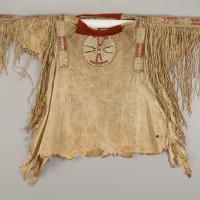 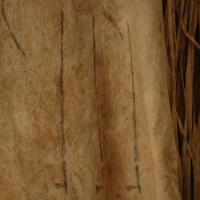 What is among the most exciting elements of this shirt are a series of pictographic and geometric drawings found on either side. If you look closely you will see faint indigo drawings of six heads, above which lines depicting lances or coup sticks float. Below the heads is a row of four bear paws, and to the right are three pipes. The exact meaning of these elements was not recorded; however, based on Indigenous knowledge and with the help of Dr. Timothy McCleary, a colleague from Little Bighorn Tribal College at Crow Agency in Montana, we believe we know what they mean.

The heads with lance or coup sticks likely reference coups counted on (or subjected to) an enemy (when a warrior touches his enemy with his coup stick, it was regarded as an act of extreme bravery called “counting coup”). The pipes may suggest how many times the shirt’s owner led successful war parties. The bear paws show how many Plains grizzlies the owner of the shirt killed. American ethnologist Garrick Mallery’s 1889 publication, Picture Writing of the American Indians, supports these interpretations. His book depicts a drawing and explanation by an Oglala Lakota man made in the late 19th century that explains the meaning of pipes depicted in this way, as well as other design elements recorded here, which emphasizes how wide spread such imagery was among Plains artists.

The designs on the front of the shirt tell even more specific stories about the owner. Here we find drawings of five X-like forms arranged below the medallion. These are war honor marks. From left to right, we can read these to recount the original owner’s achievements in war. The first shows the warrior was the third person to touch a live enemy in battle (counting coup). The next shows that after he had dismounted an enemy, the owner of the shirt captured the enemy’s horse. The next two X's show he was the fourth person to count coup on an enemy during battle. Then the last shows that he was again the third to count coup on an enemy. Mallery recorded variations of these designs and meanings as told to him by Hidatsa, Mandan, and Arikara consultants.

These marks were common ways to record war deeds among the Native people of the Upper Missouri River region and are also found on clothing, tipis, and in rock art. The Mandan, Hidatsa, Arikara, and Crow people are well known for their use of this X to represent an enemy. While a few other tribes also used this imagery, this form with the associated hash marks (denoting the number of coups) and horse hoof prints are all from one of the Upper Missouri River tribes.

Indigenous people have faced so many challenges to their ways of life since the arrival of settler-colonial people. Sickness and disease took its toll, but so did forced relocation, land allotment that broke up clan and society structures, prohibitions against ceremonies and religions, traumatic boarding school experiences, broken treaties, and institutional and structural racism, to name a few. Each of these created seemingly insurmountable hurdles for Indigenous people to overcome.

Many of these challenges still exist today. The Navajo Nation has been hit hard by COVID-19. Two Lakota reservations are under attack from the governor of South Dakota for the medical checkpoints they put up on their own roads to protect their citizens from the spread of this disease. Generational trauma from past experiences warns them to protect themselves. Elders are the keepers of knowledge and they are most at risk. The transmission of intergenerational knowledge of all forms, artistic included, is difficult during such times. But this knowledge still exists in communities. These art forms are still created by brilliant and innovative Indigenous youth. And this should give us hope for the future.