Stefania Van Dyke is associate director, interpretive engagement. She has been at the DAM since 2012 and takes solace that Albert Einstein once asked, "If a cluttered desk is a sign of a cluttered mind, of what, then, is an empty desk a sign?"

The notion of place is important to many artists—Monet tirelessly painted his garden. O’Keeffe played out her love of New Mexico in paint. But it has never been made so powerfully concrete to me as when I traveled with Denver Art Museum colleagues to Chadds Ford, Pennsylvania and mid-coast Maine in preparation for the upcoming exhibition Wyeth: Andrew and Jamie in the Studio.

Andrew Wyeth has long been a beloved figure in American art, perhaps best known for his 1946 painting Christina’s World (Museum of Modern Art). His son, Jamie Wyeth, made a name as an innovative painter as early as age 17.

Their Connection to People & Places

Father and son steeped themselves in the surroundings of their hometowns and all aspects of their subjects there. Christina Olsen’s rustic and worn house in Maine (pictured above), the cracked walls at the neighbors’ farm, the soft curve of the Pennsylvania hills, and the rough shore of Monhegan Island (see slide show) all come to vivid life in their paintings and drawings.

When you take time to look at their works, you can feel Andrew and Jamie’s deep emotions and intimacy with these people and places. With the exception of Jamie’s short time at Andy Warhol’s Factory in New York in the mid-1970s, both artists stayed geographically isolated from the art world throughout their careers.

To both Andrew and Jamie Wyeth, these places play a crucial role in forging an emotional connection to subject:

"A change of subject is really very unimportant to me, because there are always new revelations coming out of that one subject. I've walked that hill a hundred times, a thousand times, ever since I was a small child, so it was deathless as far as I was concerned. I could probably just paint that hill for the rest of my life, actually." –Andrew Wyeth (1917-2009)

"I'm not interested in traveling. I never travel. I don’t care about interesting looking trees. What I do care about are trees that I know, that I’ve grown up with and touched. I just think it makes the work more meaningful. The more you’re familiar with something and comfortable and have a love for it or a hate for it, even, the better the result.” –Jamie Wyeth (b. 1946)

Walking in the Wyeths' Footsteps

As educators, we sometimes imagine ourselves jumping into a painting and we ask young students, “What do you see? Smell? Hear? How do you feel?” Walking in the Wyeths’ footsteps in Pennsylvania and Maine, we could answer those questions for real. I smelled dampness. I heard echoes. I felt cold and alone. We were in the paintings. 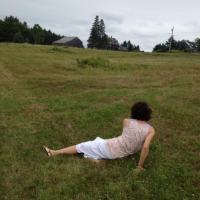 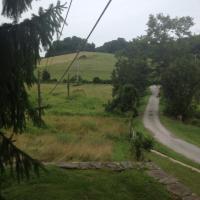 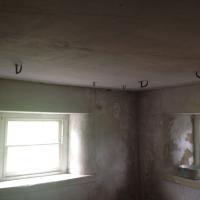 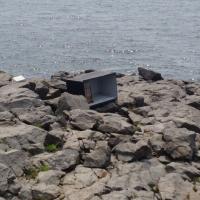 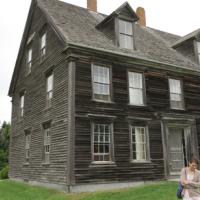