Students will use Harry Fonseca’s painting Shuffle Off to Buffalo #V to spur their imaginations. They will write their own stories about how Coyote came to dance on stage dressed up as Uncle Sam.

Shuffle Off to Buffalo #V

Harry Fonseca was born in Sacramento, California in 1946, and passed away in December of 2006. He came from Maidu, Hawaiian, and Portuguese background, and his Maidu ancestry largely influenced his work. Much of his early inspiration came from traditional Native art forms, including basketry and dance, and from the Maidu creation story. Fonseca also studied the art of European masters and loved the opera. He connected to tradition in new ways, combining themes and patterns from his heritage with his own artistic vision and ideas from contemporary society. Fonseca traveled internationally to paint and lecture, and participated in numerous exhibitions, including the Venice Biennale in Italy in 1999. He was the recipient of a number of grants and awards, including the Alan Houser Memorial Award, presented to him by New Mexico Governor Bill Richardson, celebrating “an outstanding individual who has demonstrated artistic success and community involvement.”

Fonseca began using the character Coyote in the late 1970s (the Denver Art Museum owns two from the series; Coyote #1 shows a Maidu dancer dressed as a coyote wearing a condor feather cape). Coyote appears in several traditional Native legends from different tribes and has many meanings, including, but not limited to, the trickster, the wise man, and the changer or transformer. He has a strong place in the Maidu creation story. Fonseca created a series of paintings that places Coyote in contemporary settings—as a biker, or a dancer in the ballet Swan Lake, for example. In placing the Native American folk hero in contemporary, mainstream settings, Fonseca created imagery that can break down stereotypes. He shows both Natives and non-Natives that Native people are active participants in making mainstream life and culture.

The title, Shuffle Off to Buffalo #V, comes from a song in the Broadway play 42nd Street.

Fonseca applied glitter to the border, adding to the theatrical and playful look of the painting. Fonseca may also have used glitter here to reference the California gold rush. Between 1846 and 1870, in California alone, the gold rush caused an 80 percent decline in American Indian populations that directly affected Maidu culture.

Fonseca placed Coyote on a stage dressed in an Uncle Sam costume. By placing Coyote in this contemporary setting, Fonseca made the suggestion that Coyote is the president of the United States. Coyote himself represents Native Americans, and in this painting asserts that Native people can take on any role they choose.

Fonseca chose to apply the paint thickly. The red curtains appear velvety and heavy. The yellow frame, enhanced with glitter, seems to emphasize Coyote as a celebrity. 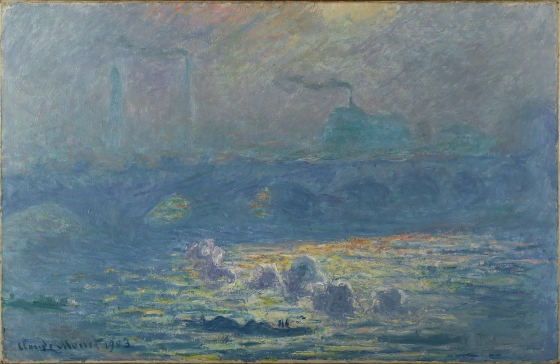 Students explore the ideas of light, shadow, and color, as well as what is considered beautiful, through their examination of Monet’s Waterloo Bridge. They will put these ideas together in a written postcard designed to help travelers see the beauty of London. They will then compare their thoughts with those of Monet. 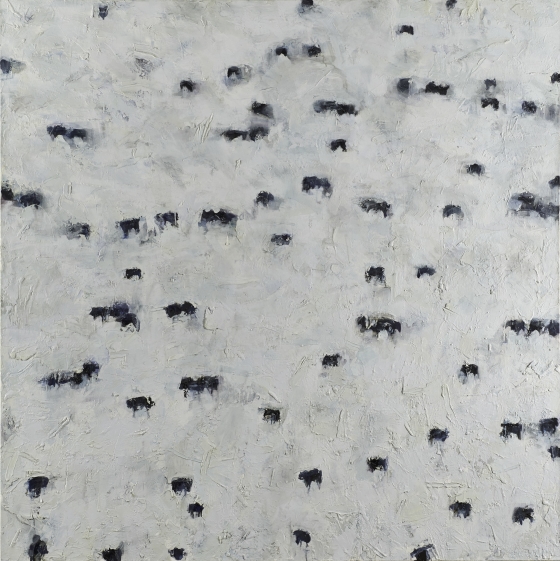 The Cool Colors of Snow

Students explore what is meant by warm and cool colors and apply what they learn to Theodore Waddell’s Motherwell’s Angus. They will also explore the idea that snow is really white, but in the painting, Waddell uses different colors to create the snow. They will then experiment with cool color paint to see what different types of feelings they can create with color and share what they discover in small groups.

Students will become familiar with the weaving process and create a paper weaving that includes designs inspired by the Navajo Eyedazzler Blanket/Rug.

Students will collaboratively write an age-appropriate, one-paragraph description of the Eyedazzler Blanket/Rug, citing specific examples from a close reading of the image and referencing the informational text as needed.

Do You See What I Write?

Students will identify words that reflect the exact opposite of what they see in O’Keeffe’s Petunia and Glass Bottle. They will then think of words that capture what they do see as well as the emotions of the painting, and write a poem or museum placard for the piece. Peer editing is built into the lesson to help students refine their work.